I am honored and humbled to have had a magnificent QH mare, named Lily in my life and barn since January 2008. I am deeply saddened to say we had to say “Good-bye” to her Friday 23 August.

Lily came to me through the farrier I was using to care for my horses at the time.  He told me she was used on cattle drives, in therapy programs and parades, carrying 2 flags at a time!  He bought her to care for his timid wife.  Sounded perfect for me to add to my small horse barn as a guest/lesson horse.

Lily was not always perfect. Two to three times a year she had a major temper tantrum.  Boy they were hum dingers!  Every other time of the year she was as perfect as a horse could be.

I had a dear friend who had experienced a terrible fall from horse resulting in a serious injury.  When she was ready to begin riding I offered Lily as her first ride back.  When I caught Lily out of the field I explained to her what I expected and required her to do.  Lily agreed and did everything perfectly. 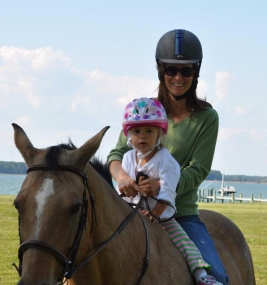 Lily was the first horse a darling baby ever rode.  At less than 1 year old my friend lead Lily as I held her daughter on top of Lily’s back as we walked around the farm.  A few years later they invited Lily into their house.  It was a hilarious production!  Lily walked in, looked around the family room.  She saw the two overstuffed sofas, looked at me, looked at the sofas and said, “Now this is what I am talkin’ about!  A girl could be very comfortable here.”  All of us broke out in hearty laughter. 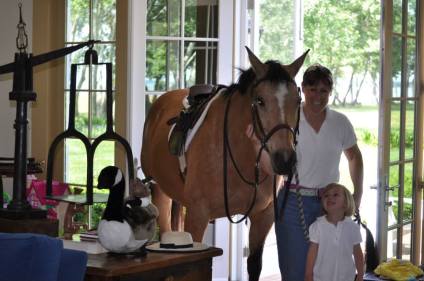 One day I was not feeling up to par and asked Lily to treat me as she did her beginner riders.  She did.  Usually Lily would have a good time with me – spook, play, be obstinate –  this day she was careful with each footfall, never placing a foot where it might cause a problem with my balance.  Such an honor to have that experience.

Lily helped teach many children and adults how to not be afraid of horses. 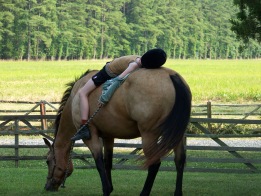 Most recently Lily encouraged and kept a wonderful little boy, now 8 years old, riding.  He would get on her, once we were on our way he placed her on auto pilot and began telling Lily marvelous stories.  He learned how to have confidence and faith that horses are awesome beings.

Lily was buckskin in color; her color changed season to season.  In the winter she would be almost cream white.  In the summer she had a dark bronze tan. 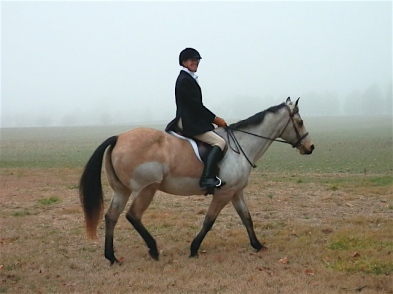 Without Lily in my barn there are many things I would never have done.  Horses I would not currently have.  Riders I would not have had the privilege of teaching.  Experiences, experienced.

Friday morning all the spirits of those who have passed from my barn were there to great Lily and to show her the way across.  The feeling of the energy that surrounded the farm was amazing.  As she was being loved on that morning during her morning nap, Lily lifted her head ad exhaled a perfect heart in the shavings at the lap of one of her dear children.

I miss her and thank her for being part of forming who I am today.